A gift from Polynesia to the whole world

A gift from Polynesia to the whole world

“Sometimes 20-30 men go out to sea with the swell of the surf, lie flat on an oval piece of wood of their size and width, leave their feet directly on it and use their arms to steer the wooden plank. They wait until the surf is at its highest and paddle all together with their arms to stay on the top of the waves and rush towards the beach with amazing speed (…)” This is how Lieutenant James King, the commander of Discovery, described Hawaiian surfing in the ship’s logbook in 1779 as the first European.

At that time, surfing was an essential part of Hawaiian culture. It was embedded in the society and myths of the island. Chiefs demonstrated their power through their surfing skills, and the status of a citizen was defined by how well he coped with the ocean. Anthropologists can only guess at the time of the origin of surfing in the Polynesian culture, as there is no precise information about the time and the development of the Polynesians. Around 2000 BC, the migration of people from Asia to the East Pacific began. Hawaii was reached by the first Polynesians in the 4th century B.C. Those who made the arduous journey from Tahiti to Hawaii were characterized by an extraordinary understanding and love of the sea. They brought their customs and traditions to Hawaii, including surfing.

When Captain Cook arrived in Hawaii on the Discovery, surfing was already firmly anchored in the history of Hawaii. Before the first encounter with Cook, Hawaii was strictly divided into classes, which also had an effect on the water: there were reef & beach breaks where only the skinned ones were allowed to surf and those for the normal citizens. Many of Hawaii’s leaders were revered for their surfing skills. 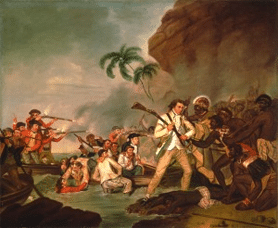 There were three types of Hawaiian surfboards: The Olo, up to 24ft (1 ft = 1 foot = 30,48 cm) high and thicker in the middle than at the ends, the Kiko’o, 18ft long and slightly thinner, a fast board, but very difficult to control and the Alaia, which was only for the chiefs, 8ft. long and thin, wide at the nose (top of the surboard) and tapering backwards. In 1778, when Cook’s ships reached the island, surfing was highly developed, but what Cook described in 1779 was the zenith for now. For in the shadow of European exploration, surfing experienced a major decline over the next 150 years. After Cook had published his research results, the island chain became a destination for many adventurers, captains and missionaries.

The Hawaiian culture suffered under the influence of imported new technologies and religions and thus the importance of surfing decreased. The indigenous people were educated to monotheism and hard daily work. The only thing that died faster than the culture was the Hawaiians themselves: Diseases, alcohol and other drugs claimed their victims and so the population shrank from about 600,000 in 1779 to just 40,000 in 1896. But despite this development, surfing survived.

THE START OF COMMERCIALISATION 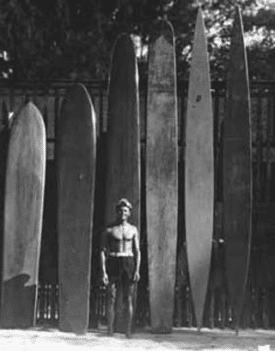 After the Hawaiian archipelago was annexed to the USA in 1900 as the 51st state, more and more people travelled the islands. One of them was Jack London, who learned to surf in 1907 from the journalist Alexander Ford Hume and thus also got to know the most celebrated Waikiki Beach Boy at that time, named George Freeth. All three had one thing in common: they loved the “sport of kings”. In the same year London wrote “A Royal Sport: Surfing in Waikiki” and a year later they founded the “Hawaiian Outrigger Canoe Club”, the first club dedicated to the preservation of Hawaiian surfing, offering rental boards and surf lessons from beach cabins. By 1915 the club already had 1200 members.

Also in 1915, the world first became aware of Duke Paoa Kahanamoku, who was not only three-time world champion over 100 meters freestyle, but also one of the best surfers in Hawaii. As a world-renowned actor, he used his fame to spread the word about surfing. In 1915, he travelled to Australia as part of a swimming demonstration, spontaneously made (shapte) a board from pine wood, which he demonstrated at Freshwater Beach in Manly to great acclaim, and thus single-handedly laid the foundation for the “surf superpower Australia”.

In 1928 Tom Blake, the inventor of the fin, organized the first competition, the “Pacific Coast Surfriding Championships” in Corona del Mar. Top surfers from all countries competed with each other every year until 1941, when the Second World War put an end to the event. However, the trend of surfing continued and attracted freedom-seeking people such as Woodbridge Parker, who, together with Rabbit Kekai and John Kelly, a big wave pioneer, had a decisive influence on Spot Makaha. They were also the ones who developed faster and lighter boards in the 30s, 40s and 50s.

THE ERA OF MODERN SURFING

In 1946 the boards were no longer simply shaped from wood, but Bob Simmons made a foam-filled board with balsa wood rails and a deck of plywood. Shortly after, Pete Peterson took another step forward and developed a fiberglass board that weighed only 12 kg. Fiberglass had been developed during the Second World War. In 1958, Hobie Alter and Gordon Clark were the first to make boards entirely of foam and fiberglass, revolutionizing the market. But not only the boards became faster and lighter, research was also done on protection against cold water and so Jack O’Neill produced the first wetsuit in the early 50s.

In 1953 a photo appeared in newspapers around the world showing Woody Brown and two others surfing a gigantic wave in Makaha. At that time, surfing was booming in California and this picture moved many to Hawaiizu. Two of them were Fred van Dyke and Peter Cole, who together with Edie Aikau and Buffalo Keaulana became the best big wave surfers of that era. During these years surfing developed from a marginal sport to a mainstream sport.

From this time on, Hollywood also loved the sport of kings and the market was literally flooded with surf movies like “Gidget” or “The Endless Summer”. Along with this boom came the surf fashion, everybody wore board shorts and listened to the songs of the beach boys. Everything that had to do with surfing was absolutely hyped. In 1966 Nat Young produced the first 9’4” board and thus ushered in the era of the shortboard, making the sport even more booming.

Where once only a dozen people surfed, thousands now joined in. Surfboards were now made of plastic, mass-produced and ever shorter, far from the ancient Hawaiian roots. Now there are dozens of surf magazines, videos, movies, and websites about surfing worldwide, and a multi-million dollar market has developed that spans the globe.

Despite commercialization, the greatest benefit of surfing is the fun and special connection with nature for millions of people around the world. Surfing is an element of traditional Hawaiian culture that has survived into modern times and brings many other aspects of Hawaiian life – surfing is truly a gift from Polynesia to the world.